With much pomp and ceremony B.M.C. unveiled the Australian version of the Mini-Minor before 80 journalists at Sydney's Warwick Farm last month.

The new car, which we will know as the Morris 850 (although many will rebel and call it the "Mini" in private) will sell for £775.

One of the most unconventional cars on the Australian market the 850 should be a formidable contender in the ever increasing battle for the lion's share of our small car sales.

Although only given the go-ahead signal by B.M.C. Chairman, Sir Leonard Lord, in 1956, Issigonis had been experimenting with such a car "on the side" for some years.

Before and after the second world war he successfully raced his lightweight Special, a supercharged sprint car which, due to its rubber suspension and monocoque construction, was a fantastic performer.

In 1952 Issigonis converted his own Morris Minor to front wheel drive.

When Sir Leonard Lord asked him to start work on a new small car Issigonis decided immediately that to save space the engine and transmission unit would have to be one unit at the back or front of the car.

Driving the first rear-engined prototype he "spun off" at the first corner and this dampened his enthusiasm for this type of vehicle.

After further experiments it was found that a transverse mounted front engine was the most practical design.

But, Issigonis went on further. To save even more room he placed his gearbox, driven by helical spur gears, underneath the engine. The complete unit then occupied only 18 inches of the car's length.

Issigonis then set about designing his suspension. Realizing that the main problem with light cars was the unsprung weight which, on bumpy surfaces, could severely buffet passengers, he attempted to make his wheels and suspension as light as possible. Ten inch wheels and rubber cones for springs with lightly loaded telescopic shock absorbers solved this problem.

The rubber suspension has many unique character characteristics. Lighter than a comparable torsion bar set-up the cones are virtually indestructible and (they are a combination of "shear" and "compressed" rubber) the springing remains constant under varying loads.

From here he went to the design of the car itself.

Placing the wheels on each of the four corners to further increase interior space, Issigonis made a mock-up chassis and seated four people on it. Round them he made the first rough design allowing for plenty of head and leg room.

At first the body looked extremely dumpy, and according to some critics, it still does, but the application of a few basic aerodynamic principles made certain of good stability in sidewinds.

In Issigonis' words, the car has "bags of fins" even though they can't be seen.

With typical thoroughness Issigonis carefully designed every inch of the interior.

Once the passengers had been seated comfortably with as much leg room as possible and head room enough for six footers — even when wearing hats! — the rest of the space was shaped for carrying luggage.

There is a parcel shelf extending the length of the fascia along which at night a switch on the side of speedometer binnacle throws a beam of light. As a person who is always losing packets of cigarettes at night the light proved a real boon to me.

Along the doors in front and at the sides in the rear are metal pockets which (in the course of our thorough test) we found would hold two dozen bottles without rattling or numerous small parcels on shopping trips.

Under the back seats space has been lined for carrying brief cases and small parcels and there is more room on a further parcel shelf between the back seat and rear window. The boot is small but the lid opens downwards to make a tray on which a mountain of luggage can be stacked.

Finish is good. Although it is evident that everything possible has been done to keep costs down the doors are fitted with kick-shields and an interior light and two ashtrays for rear passengers have been included. The instruments, speedometer and petrol gauge are set Morris Minor style in the centre of the fascia. Warning lights for oil pressure, ignition and a high beam headlight indicator are on the face of the speedometer.

Self cancelling indicators are operated by a stalk on the right of the steering column. A flashing light on the end of the stalk signifies their operation.

The electric windscreen wipers, however, are not self-parking. Although this could be called a luxury I do not think it would have cost much more to install self-parkers and these would certainly ensure that drivers will watch the road and not the wipers in conditions where more than usual vigilance is required.

After the Warwick Farm preview B.M.C. gave each Melbourne journalist the job of ferrying a car back to dealers.

For the first time since the amalgamation of Austin and Morris dealers in either make will handle sales of the 850. On the trip to Melbourne the car proved it had a character all of its own. Its front wheel drive and all-independent suspension seemed to "straighten out" the corners and it was possible to maintain an average of 50 m.p.h. without exceeding 60 m.p.h. at any stage.

It was on the way back from Sydney that the only fault in the car, to my way of thinking, became apparent.

Some time after leaving Sydney a tendency of the car to pull to the left when braking was noticed. Putting the phenomena down to a faulty front brake I pressed on only to find, when 70 miles from Melbourne, the car sliding sideways going through a corner in what the experts would probably call "final understeer". Luckily we were travelling at only about 15 m.p.h. at the time but inspection showed that a front tubeless tyre had given up the ghost and, letting the wheel sink onto its rim while rounding the corner, had bent a tie rod and disarranged some of the drive mechanism. This incident could have been "one in a million" but another well known small car manufacturer has a policy of never fitting tubeless tyres to his smaller wheeled vehicles. The reason given is that the stresses placed on a small diameter wheel are much greater than those placed on a larger diameter and that, due to its "tighter" curve, it is harder to get a satisfactory seal on small wheels.

On returning to Melbourne one of the distributors arranged a further car for completion of the test. Before leaving the showroom the two front tyres, which had lost some air, were replaced with two brand new wheels and tyres out of stock.

On both nights on which I had the car one front tyre went flat and the other lost a little air.

A prominent overseas journalist has also noted that the tubeless wheel on Minis is not the most reliable proposition.

This finding, however, in no way detracts from the car but merely adds to the tubeless versus tubes argument. 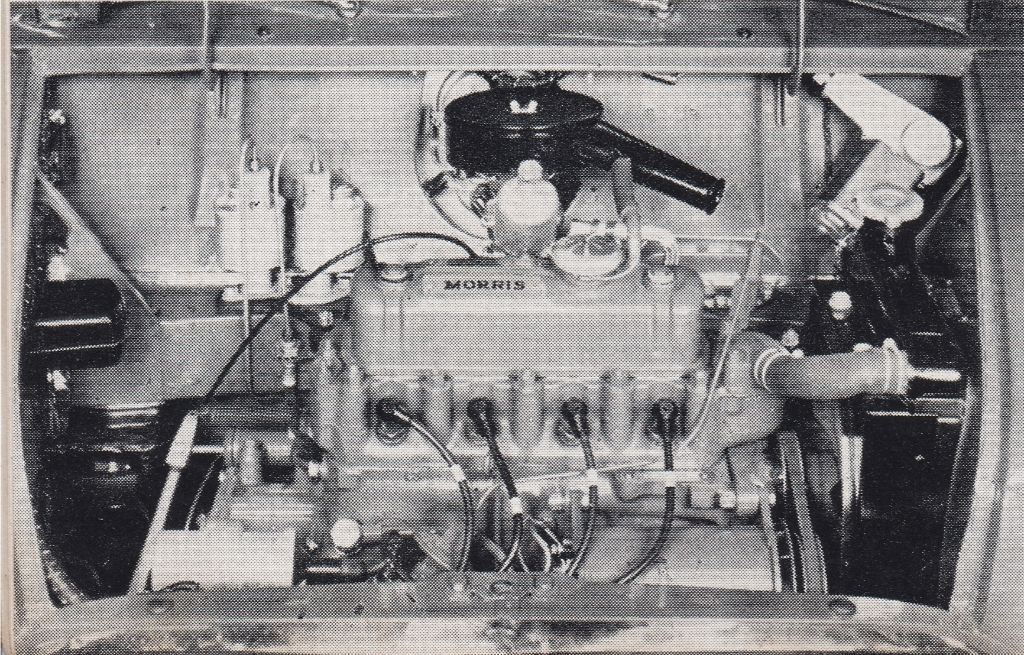 The revolutionary feature of the new '850' is the transversely mounted engine. The gearbox, driven by helical spur gears is underneath.

Exploded view clearly shows the small amount of space occupied by the engine and the ample space for passengers and luggage. 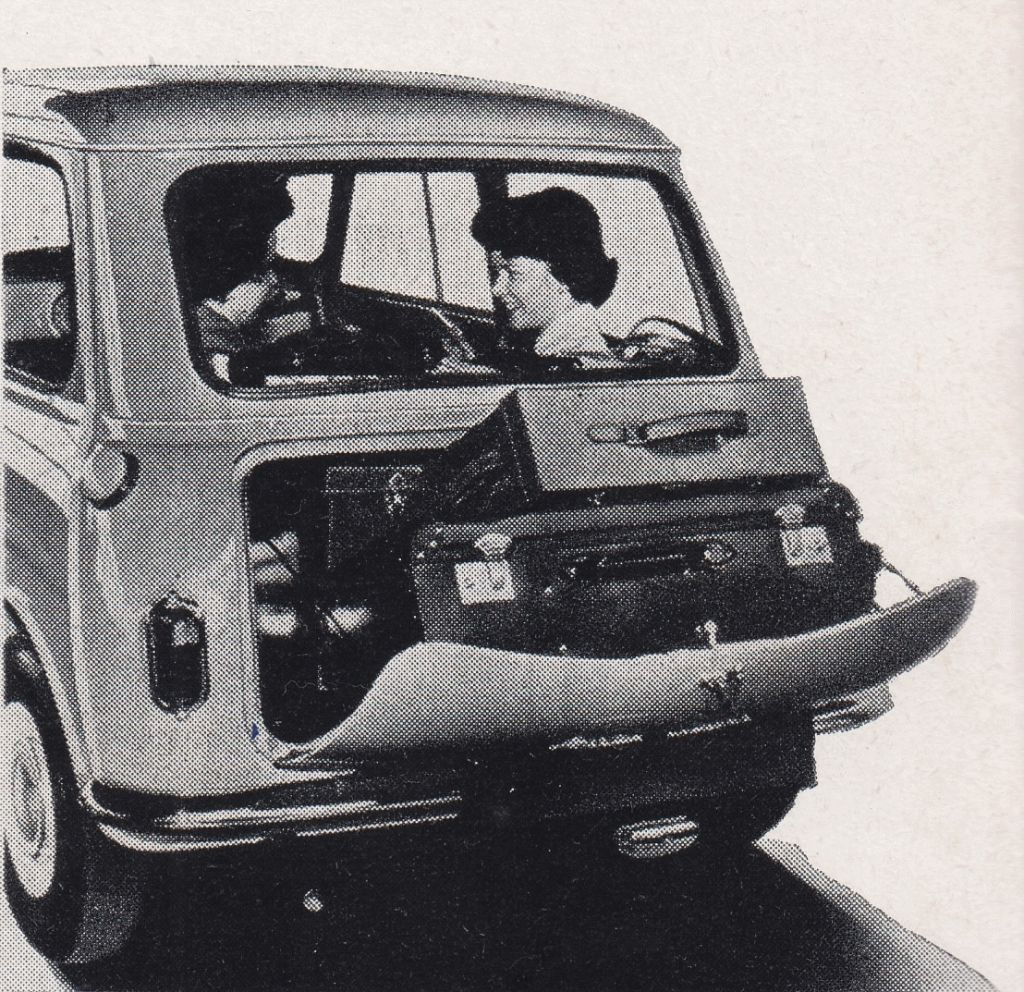 With the boot lid down acting as a tray a large volume of luggage can be carried. 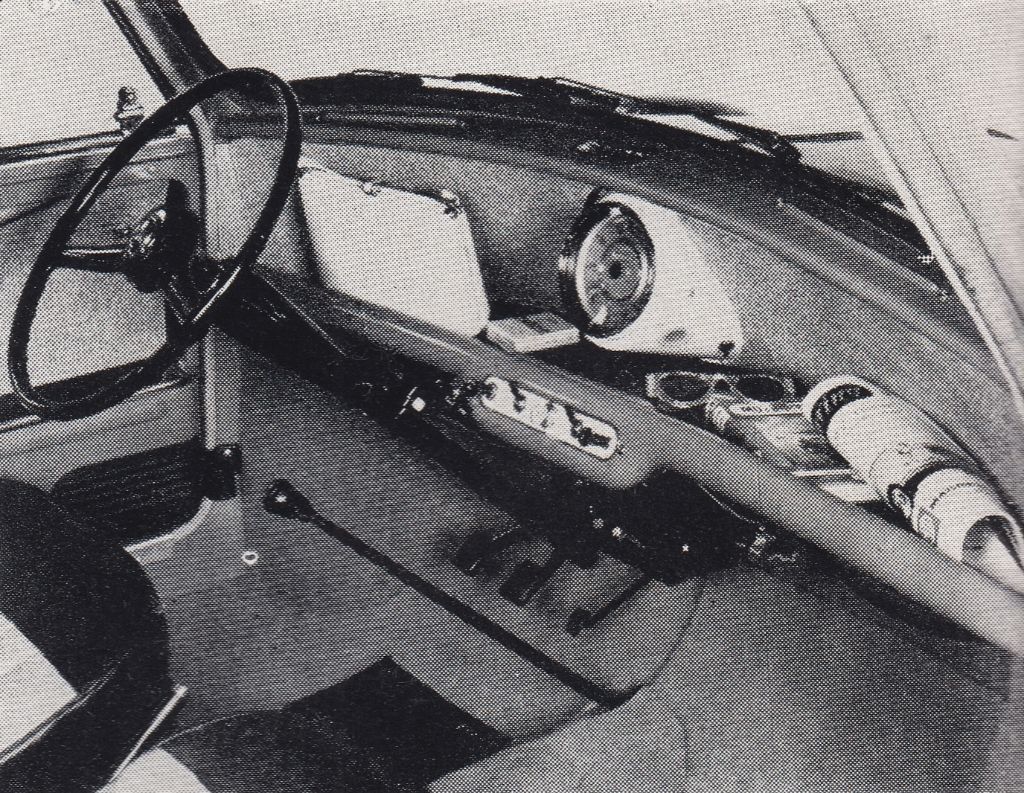 The fascia is most functional. The full width parcels tray is provided with illumination from the speedometer for night use.

At the Warwick Farm preview one journalist asked B.M.C.'s racing manager, Arthur Grogan, what would happen when a driver reached the limit of adhesion. "What limit of adhesion", replied the irrepressible Grogan.

And although the visitors hurled the 850's at the 'Farm bends with ever increasing speed they too were unable to find it. Entering a corner it is possible to put the 850 into a genuine four wheel drift and from then on virtually steer it with the accelerator.

Full acceleration will cause the nose to drift out a little on really tight curves and on a trailing throttle the tail will slowly drift out in oversteer.

If a driver enters a bend too fast he is able to use these characteristics to "wash off" excess speed even while keeping to his correct line.

Performance and maximum speed (73 m.p.h.) is close to what will probably be the car's greatest competitor, the Volkswagen, in the lower ranges but the freer revving B.M.C. motor enables the 850 to pull away over the higher speed ranges.

Brakes are adequate and a relief valve is incorporated to prevent the rear wheels locking.

Who will this car appeal to? First of all young men should be attracted by its low price and, at that low price, sporty performance. The family man without the cash to spend on more costly cars will appreciate the roominess and economical running, the businessman will no doubt be interested in its capabilities as a "second car" which is more and more becoming part of the Australian way of life and, of course, the enthusiast, because of the car's unique handling and potential for high performance tuning. 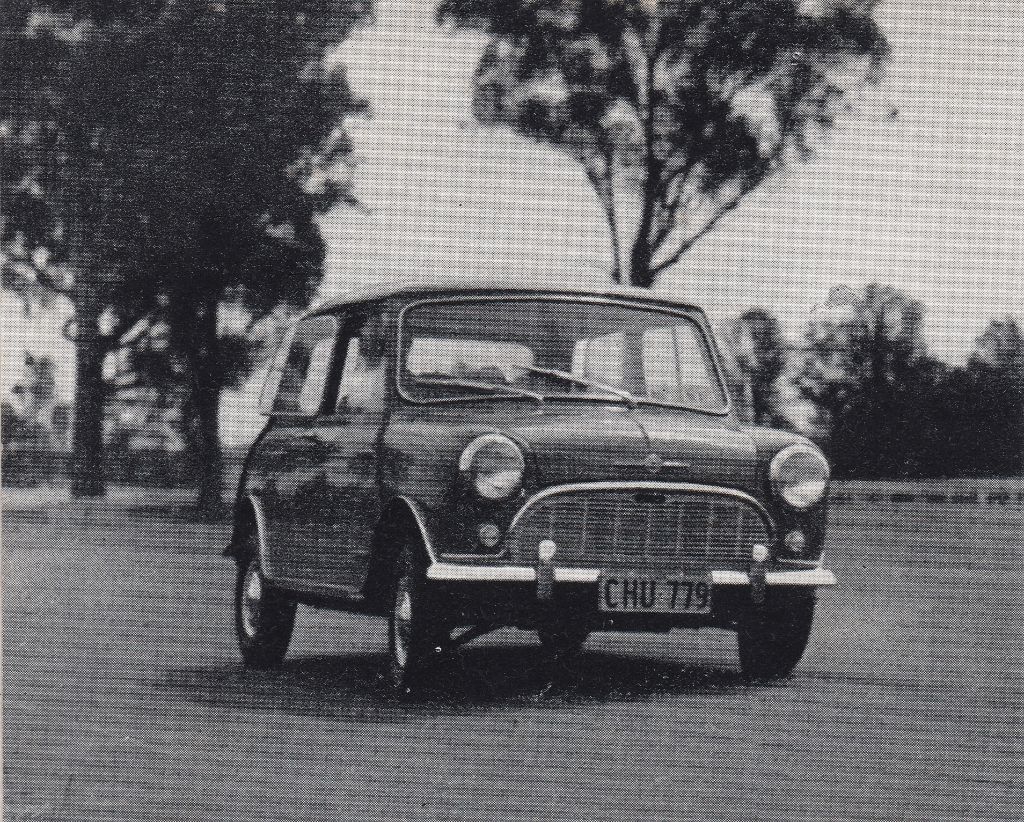 Brakes: Hydraulic with leading and trailing shoes all round; pressure limiting valve on rear.

This article was originally published in the April, 1961 edition of Australian Motor Sports and Automobiles magazine.