As we predicted some time ago, the Australian manufacturer is starting to produce cars, not only for the driver who wants basic transport and nothing else but also for the enthusiast who wants that "little bit extra" which sets his car apart from the mob's.

These cars will be re-vamped versions of normal production models and the first to reach the market is B.M.C.'s Sports 850. 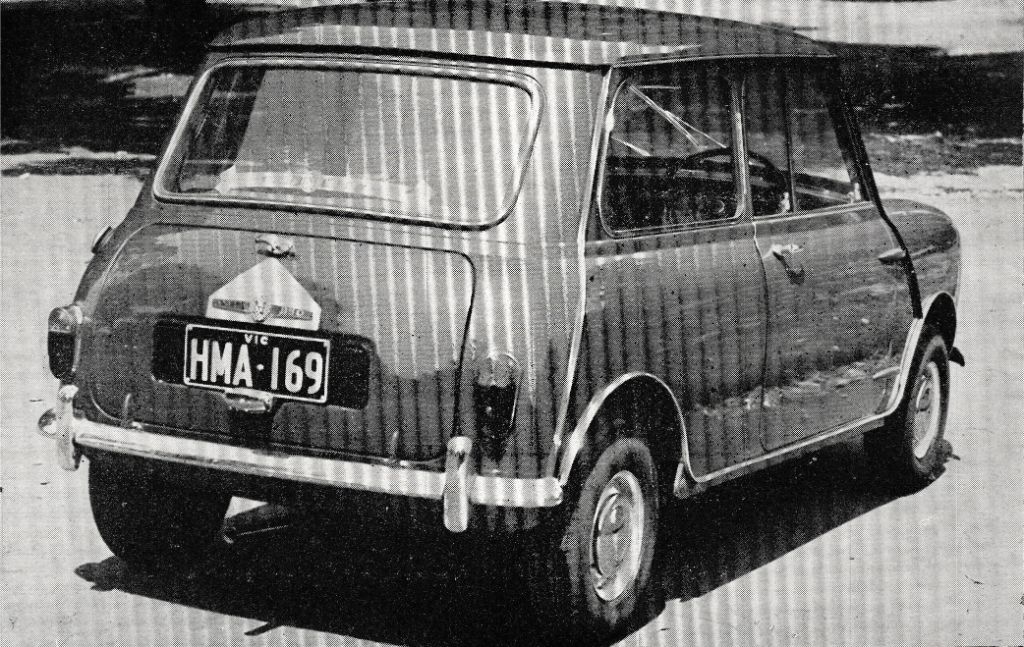 Colored flash and “Sports 850” motif is a kind concession by B.M.C. to owners of more standard cars. This is the view they will usually get.

The really keen enthusiast may be a little disappointed at the short distance B.M.C. have taken the tuning of this model. He may consider the car has too much glamour and not enough go. B.M.C. felt, rightly we believe, that a car as advanced as the famed Cooper-Mini with its enlarged motor, disc brakes and other goodies would be too ambitious (and too costly) to get the volume sales necessary to make any production venture an economic possibility in Australia.

So the Sports 850 comes to us with twin carburettors, special manifolding and a tuned exhaust. On the glamour side there is a chrome grille, chrome rocker cover and a "Sports 850" badge, together with a colored flash, front and rear. Full two-tone bodywork will also be available. It all adds up to a distinctive, more powerful car at a cost that most enthusiasts, despite their well known shortage of ready cash, can afford.

It also means that these same enthusiasts have an excellent basis for improving performance still further and, joy of joys, can get the initial mods (twin carbs and exhaust) for the few pence extra per week the increased price will add to their hire purchase payments.

But don't go away with the idea that these simple mods do nothing for the car's performance. We have a sneaking suspicion that B.M.C. labelled the Sports 850's with the distinctive flash front and rear so that owners of standard minis would not think they were due for a valve grind when they were passed by one. The ruse has probably saved the engineering department from some scathing letters about the life of their engines because the sports model can really move.

The standard version, of course, is no slouch but when lined up beside the Sports 850 its performance figures pale into insignificance.

For instance, we managed to knock a whole nine seconds off the 0 to 60 acceleration time. Maximum speed went up seven miles per hour! Unless we had seen it ourselves we would not have believed it possible and the figures show that this is no haphazard conversion. Performance figures such as those we clocked are a clear indicator that the simple modifications have been scientifically designed.

Credit for this goes to Melbourne's Peter Manton who designed the set-up. Peter has been racing 850's in a variety of guises since they first came to Australia and the experience he has gained has made the Sports 850 worth hankering after. 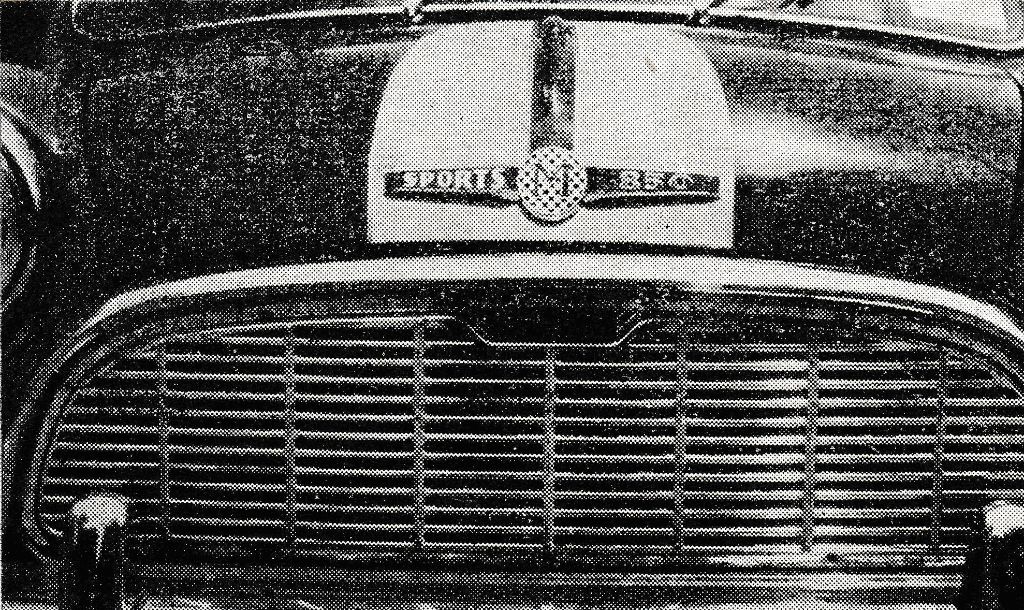 New chrome and enamel motif and flash at front identifies the car. 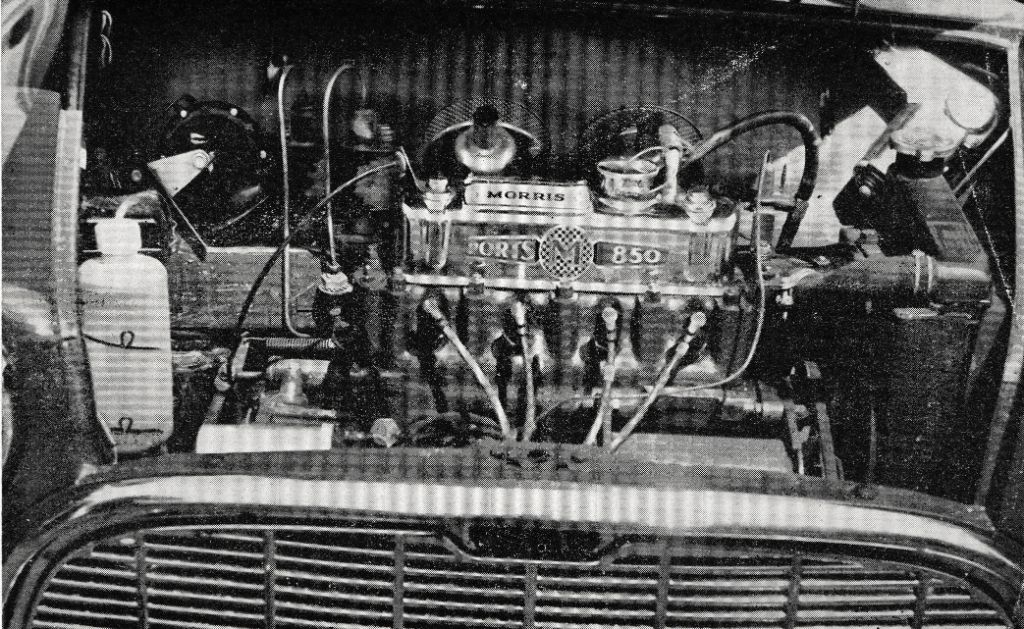 Chromed rocker cover and twin carburettors give the engine compartment a businesslike appearance. Conversion adds as much "go" as glamour.

Suspension and brakes have not been touched — not that there was any need to. The phenomenal handling of the tiny rubber-sprung, front wheel drive cars is well known and there is little that can be done to improve it unless, of course, you decided to pull the whole thing apart and fit it with a space frame and even then you'd be trying hard to equal the present arrangement. The brakes, although pedal pressure is a trifle heavy, can lock the front wheels if you go for them in a hurry (a relief valve prevents the rear wheels from locking) and that's about as far as you can go no matter what kind of set up you've got. Admittedly, repeated application will cause fade, but close scrutiny of brake lights at various race meetings shows that the pedal doesn't get much use anyway.

We enjoyed our second chance to test the 850 as it is the kind of car that seems too good to be true and after a while the impressions gained on our first test seemed to border on the fantastic. They were about to be dismissed as dreams when Max Ward, B.M.C.'s public relations man in Melbourne, offered us a Sports 850.

We immediately set out on a long trip up the bush and found out all over again what a comfortable long-distance carriage it was. After covering 186 miles in just over three hours, which meant an average of over 60 miles per hour, we left the car as fresh as when we set out. More amazing still, at no stage did the speedo creep much over 70 m.p.h. and the 30 limit was observed strictly through towns.

The ability to travel far and fast without seeming to do so is, in my book, the hallmark of a fine car. Yet how can a person use such language about a car which costs so ridiculously little? Surely it must have some faults. It has.

Like all low-priced cars the 850 is noisy, not excessively so perhaps, but to keep the little 848 c.c. motor churning out the power revs have to be kept high and when that happens there's certainly no hope of hearing a dashboard clock ticking (if it had one) or even, for that matter, hear it chime.

Instruments are sparse. I like an oil pressure gauge; especially when a car is destined to be driven as hard as the Sports 850. The thought of the crankshaft whizzing round at close to five and a half thousand times every minute with only a little green light to tell the driver whether it's quite happy or about to disintegrate is worthy of a midnight horror show. An ampmeter would at least show whether the works were about to go up in flames too, which would be an added consolidation.

Then there's the sliding windows. Despite the fact that both windows set in the doors slide both backwards and forwards and the back passengers' windows swivel out-wards, it is difficult to set them up to provide a cooling breeze without an annoying draught sweeping across either the driver's knees or the back of his neck.

But these things can be either put right with the expenditure of a little cash or put up with as the small discomforts one must expect when buying so much car for so little money.

The only mechanical fault the Sports 850 exhibits is its gearbox. Ratios are reasonably well-chosen and although the keener drivers would prefer second gear a little closer to third this would soon wreck the clutch on cars driven by less enterprising types. Believe it or not, there are many, many people who firmly hold that a four speed box is fitted to a car so that a special "bog" gear can be incorporated for sticky going. To tell one of these people that first and not second should be used even when starting off on level ground would involve facing up to more ridicule than even B.M.C. can stomach.

So we'll accept the ratios but feel duty bound to criticise the set up as a whole. Movement from gear to gear is relatively short and although at first it is possible to miss third it doesn't take long to find it and a little practice will ensure it engages immediately on future changes. But this box is slow and the synchromesh ineffective. Changes from first to second, second to third and from third to top "snick" if the driver doesn't take time off to pause in neutral on, the way through. The same thing, only worse, happens on the way back unless double de-clutching is employed.

However, there's a ray of hope amongst this gloom. The complaints, as with most gearbox complaints, should only apply to the in-experienced driver. An experienced driver, with practice, will soon be able to find his way around the gearbox with a speed which will baffle the Sunday driver.

As should be the case with a well-designed tuning arrangement the modifications improve on the normal 850's fuel consumption. In fact, no matter how hard the car was punished, consumption never at any stage fell below 37 miles per gallon and with careful highway cruising topped 50 m.p.g.

Maximum speed was 79.6, slightly higher if you gave the engine a chance to build up over a good stretch of level road, and at this speed the car was just as easy to handle and it was at 60 m.p.h. Another important point— at 80 m.p.h. the engine is doing a relatively moderate 5,500 revs and the pistons are travelling at 2,500 feet per minute; the point at which wear becomes a problem is 2,600 feet per minute.

This is the first time that any Australian company has produced a low priced modified car for the enthusiast whose family responsibilities prevent him from buying a sports car. We feel he will be duly grateful and, with that £790 price tag in mind, definitely interested.

Hydraulic with leading and trailing shoes all round; pressure limiting valve on rear. 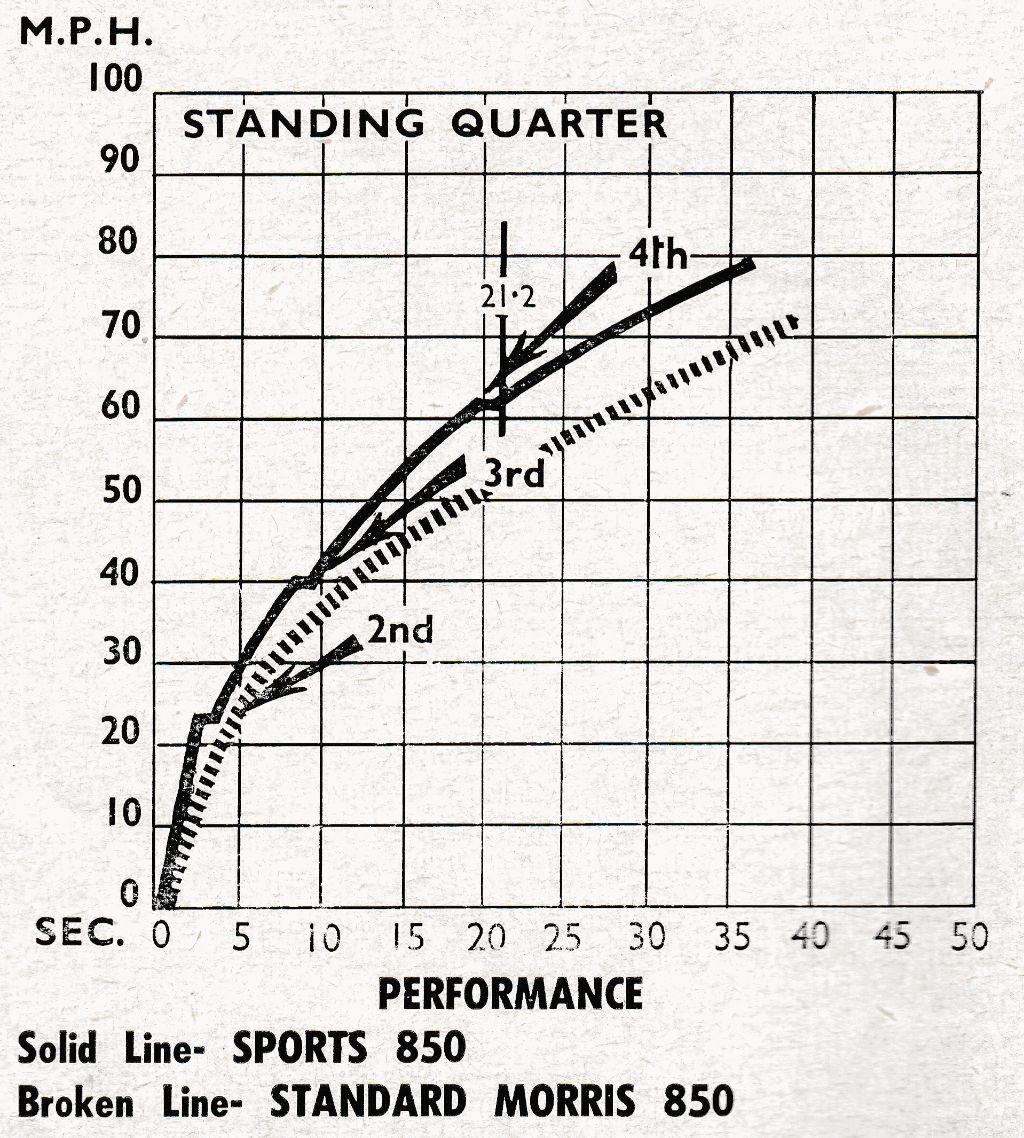 This article was originally published in the March, 1962 edition of Australian Motor Sports and Automobiles magazine.