A man's shoebox on wheels is assuredly his castle...

IT took not quite 12 months to put up 10,000 miles on the Morris 850 bought new in July, 1962, because one spends so much time in other people's road test cars that your own che miseria is left idle at home. Perhaps 5000 of the 10,000 miles were established on long trips up and down the NSW North Coast, and since the five zeroes appeared on the odometer my Morris 850 and I have shared only another 3500 miles. But the 10,000 figure seemed an appropriate historical moment, and it is to this point that we carry our story, for WHEELS readers, of 10,000 miles in the life of a Mini.

One platinum (white) Morris 850 was delivered on July 25, 1962, carrying engine No 8AM/U/H/325956, a form of hieroglyphics practiced adeptly by the British Motor Corporation. It came fitted with Olympic straight-pattern tread Air-Rides, with tubes, and the mock-walnut facia fill that has become rather U now, but which at that time was an interesting rarity.

From the outset, I decided that the car should be fed on BP fuel and Castrol oils: not because of any personal preference, but became I wanted to see how it would behave on a consistent diet. Like all such resolutions, it was difficult to keep. When one is running out of petrol, does one pass seven service stations selling Brand X to look for a place where one can tell them Bob-sent-us? So the petrols were a little mixed, although the car existed on Castrol XL for the entire 10,000 miles. I used no Moly or other lubrication boosters; again, not because of personal feelings but became I wanted to assess the car's behavior on an ordinary diet.

It was in good delivery condition, with seven miles up, when we accepted it, after a brief check to see that all wheels were in place. The first 500 miles were put up in short city runs, and at 448 miles it went in for the first service and for odd things like a rattle in the steering wheel boss and paint chips.

Then we sent it over a 900-mile trip to blow out the soot and to develop an even abrasion on the cylinder walls, as one can only do on long trips where you can keep the engine between certain rpm and piston speed limits to your own satisfaction. At 1031 miles I had the first of many punctures which were to plague me for the next 2000 miles. I insisted on tubes in the tyres because I was a little troubled by the thought of the peripheral velocity of those tiny wheels, and because one hears stories of tubeless tyres peeling off-seal on very hard corners. At 1922 miles we had another puncture, which tore the tube to ribbons. 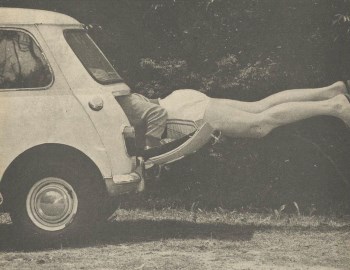 A common sight where Mini-owners congregate: checking the battery level. Accessible is a dirty word.

At the 2094 mark I found that the forward-hinged rear windows were refusing to lock open on the over-centre hinges. A very large BMC servicing organisation spent two days working on the problem, and 400 yards after I drove the one away from collecting it both windows slammed shut, as usual. At this stage I added three Smiths auxiliary instruments - oil pressure gauge, ammeter and temperature gauge - a cigarette lighter and a vanity mirror to keep my wife away from that other mirror. I tried on an exterior rear vision mirror for size, but discarded it when I found that the method of clamping it to a panel lip was abrasing the paintwork. The temperature gauge told me that the car was running far too cool - never higher than 130 degrees. Despite all sorts of tricks, even to blanking off the grille opening in 80-degree weather, this has persisted to this day. Perhaps the fan has too many blades.

At 2203 miles I decided that I needed a little more exuberance in performance and better top gear flexibility, so I handed over the car to an extremely well-thought-of tuner and modifier. He ported and polished the head, fitted stronger valve springs, and did a bit of clever relieving around air cleaner and carburettor venturis. The wheels were balanced dynamically. Tuned to a diet of 1-in-3 Shell methyl benzine, the little car would run to a corrected 80 in top, do a standing quarter in 21.1 sec, and would spin freely to almost 6500 rpm. I regret to report that it is not in the same state of excellent tune right now.

At 2454 Mini and I had another puncture, and 27 miles later - after the spare load been repaired, fortunately - yet another. We seemed to have an affinity for all the 3 in. nails for hundreds of miles around. At 2987 the servicing department rotated all wheels, and tried - again vainly - to make the rear windows lock open. They also refurbished a small flaked and rusted area around the Phillips screw at the rear of the underbody lip. Around this time I started to become disturbed at the amount of industrial fallout on the white paintwork. It started to develop a sandpaper feel from the thousands of microscopic pits in the paint that would only just respond to a vigorous abrasive polish. So I shaved it down with Re-po Extra Cut and spent a day waxing it. The paintwork, incidentally, had not been anything other than washed during the car's first 2000 miles, so that it had a chance to weather and settle in.

At 3303 miles, catastrophe. I left the 850 in a parking station, to find on my return that a large Pontiac load backed into it, and its towbar had punched a neat hole through the grille. One new grille, and enough new paint to cover the few stone chips on the bonnet and wings. I was concerned about the state of the front end, but a check showed nothing displaced.

About this time I found that the swinging of the ignition keys had begun to gouge paint from the facia lower sill, so Mini then sported a strip of adhesive tape in the right place. Also, the paint surrounding the nearside interior door lock began to flake badly, so the car went in again for a touch-up. This was when we started to notice the first faint signs of age; the scuff marks on the exterior paint of the door troughs, where passengers hauled in their feet, the extruding of adhesive from around the firewall lining, and the glue streaks on part of the headlining. Warranty took care of all but the scuff marks, which I took care of with some particularly violent abrasive.

At 6157 I finally tired of the window catches that grimly refused to lock, and started pounding a few tables in the BMC service division. After the service manager had - very tolerantly - listened for an hour or two, he acted: Lo - two new locks. And they worked, and are still working. I also pointed out that the rubber floor mat had split from the bottom of the gear lever. They were out of stock of mats, but ordered one. Shortly after the window channel lining material on the nearside started to fray, and the underneath metal to show signs of rust, so the car went in for new lining.

At 7137 miles the 850 developed an exhaust pipe rattle when the clutch was thrown out in reverse — some spot-welding fixed that — and the forward corners of the rear seat cushion started to peel away from their underlining from the distortion effect of weight on the cushion. At 7781 I flung a carelessly-replaced nave plate into the shrubbery, and a new one cost £1/5/-. At 8110 miles the windscreen washers stopped washing, but some brilliant investigation showed the jets were clogged with dried polish. My fault. Just before the 10,000 miles rolled up, the old exhaust pipe rattle returned. It is still- there.

So that was the gay life of one ADO15 model. Since the 10,000 mark, however, we have had the Great Dipswitch Mystery. Suddenly, for no obvious reason, the dipswitch refused to dip. I felt that the little tumbler mechanism inside had worn excessively, so I bought a new switch. Still, the dipswitch refused to dip. After tracing all the wiring through the harness, checking for possible short-circuits or wrong connections, I just gave up. Just 20 miles later the switch started functioning again, and the trouble has never returned. Something similar happened to the interior light, which stopped working one day and restarted two days later. The front dampers dropped dead at 12,000 miles. 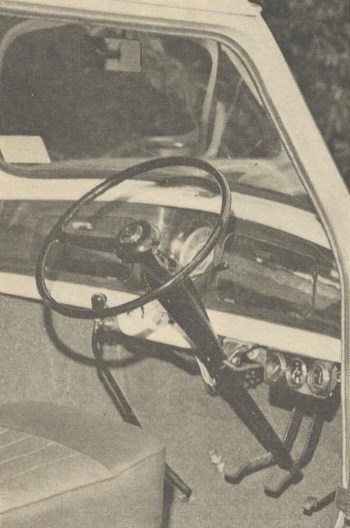 All wood and no leather makes Jack a dull toy; but the instruments help to brighten the interior.

All this, mind you should not be taken as an epistle of complaint. All the troubles were minor (the new floor mat was fitted at 11,000 miles), and only to be expected in any car. The car itself has run like a Swiss watch, with the minimum of attention outside normal maintenance schedules. The Olympics are just about to be replaced, having done 14,000 very hard miles, and still carry some tread and have worn evenly — thanks to the rotation principle.

And the 850 went anywhere, and everywhere. It was consistently cruised at 65 mph, which represents quite high piston speed figures, but oil pressure has never varied from a hot reading of 35-40lb idle and 60-70 running. One trip involved a dash up the Wingham-Mt George-Walcha road, which was then in dreadful condition after two weeks under floodwater. Only trucks, four-wheel drive vehicles and the 850 got through that day. Another time we were travelling from Walcha to Wauchope on the 100 miles or so of very winding dirt road called the Oxley Highway. With a storm looming we had to do some ten-tenths motoring to get through the rain forest before nightfall and rainfall, and although the little car was more often sideways than straight ahead it remained faithful to the end.

It has never had an oil leak, never admitted dust or water leaks, and the interior noise level is only slightly higher than when new. The seats have not sagged — as they do in the earlier 850s — and the only troubles that persisted have been the exhaust pipe rattle, which any idiot would have fixed long ago, and the fact that the nearside window has never sealed fully against draughts. The wood panelling, with its two doors, has taken away much of the cluttered look older Minis get by hiding the gloves, old cigarette packs, and small change.

Among my few lasting complaints are that the gearbox synchromesh, of prior-baulk ring vintage, was never efficient, and that I could never keep the windscreen free from smearing, despite using everything from proprietary detergents to toothpaste. Also, it is an infernal car from which to lift a three-year-old sleeping child. I once wrenched my back doing just that. And I have never liked the way the top of the jack, when in use, projects above the door sill so that it will dent the door if it swings closed. But it goes exactly where you point it, develops great gaps in traffic where none existed a moment before, and is magnificently agile under all conditions. It takes a remarkable amount of luggage; we once carried a large suitcase, a typewriter and two overnight bags in the boot, and two smaller cases upright behind the bucket seats, plus one child, one wife, and sundry odds and ends in the door buckets.

It has been a great little car. Who said they don't make 'em like they used to? 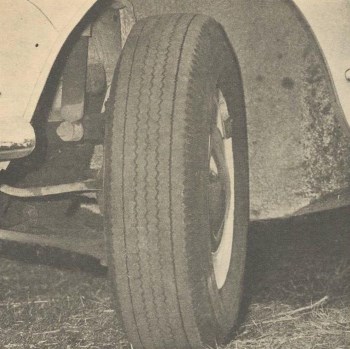 Typical of the Olympics at just on 14,000 miles. Two better, two worse.

This article was originally published in the February, 1964 edition of Wheels magazine.