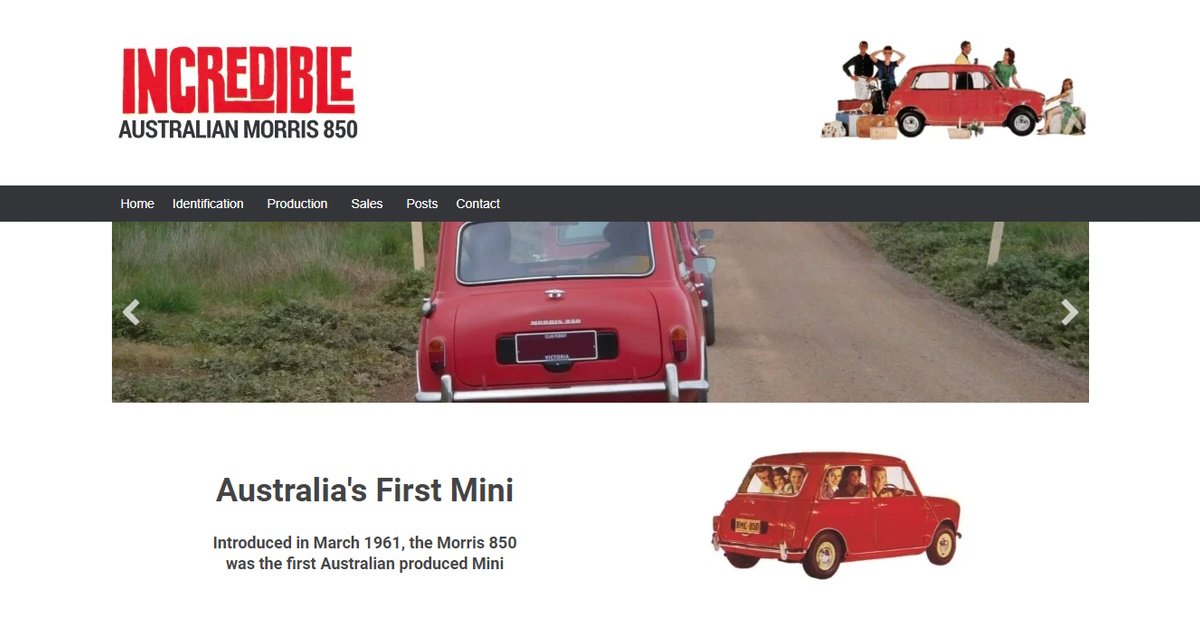 The home page of eight-fifty.com, online for five years in 2023.

In January 2018, the home page of eight-fifty.com was made live and available to publicly view online. While initially only a small introduction was shared, it was an exciting milestone in a long-term research project for the Australian Morris 850.

New content has continually been added over the following five years, with the site growing and establishing a presence in the Australian Mini community.

While different to typically content, this post serves as a brief check in to progress on eight-fifty.com, reviewing what has been reached in the first five years online and sharing insights from website analytics.

The aim of eight-fifty.com was to share as much information as possible about the Australian Morris 850, and the site has come a long way in achieving that with the content currently online.

The site is now approaching 100 pages of publicly available content, primarily under the main groupings of Identification, Production and Sales. These are supported by blog-style posts, though only less than a dozen so far.

Content has been seen and utilised by many enthusiasts, as well as being referred to on Facebook and the Ausmini web forum.

Since initial establishment, eight-fifty.com now averages several hundred unique visitors a month. While this may be nothing compared to mainstream websites, it is nonetheless impressive for a small hobby project on a 60-year-old car.

Naturally most visitors are from Australia, however a small portion from overseas also view the site. The site is typically found by search engine, but direct links and social media also assist. Reflective of the current era, more than half of users visit using a smartphone.

When initially establishing eight-fifty.com, it was recognised that the site would benefit from something extra to help attract visitors beyond just content on the Morris 850 alone.

This presented the opportunity to share information on identification of all Australian built Minis and Mokes, from which the Australian Mini Identification page was born.

The investment in this resource has proved worthwhile, with the page now ranking as the most visited page of the website (even doubling visits to the main home page). This has no doubt helped to grow awareness and credibility of the site.

Page views for most popular pages in a typical month.

Progress on the website took a notable pause during 2022, with attention redirected to eight-fifty.com’s new partnering website for Australia’s first new MINI (australian-r50.com) on the 20th anniversary of MINI in Australia.

Focus will now return to eight-fifty.com in 2023, with many items in progress behind the scenes referencing history, production changes, service, and more.

Thank you to everyone who has visited the website in the first years, including you reading this post now.

A special thanks to those who made contact and have provided feedback on the site throughout its growth.

All of these actions have helped shape the website into what it is today and will continue to help it grow into the years to come.